The Media is Not Alone to Blame


Sure, it would be nice if the media would, as Bill Maher urges, "calm down." But, you have to remember the "frenzy" is what many platforms – across the political spectrum – live for. They want the craziness, and the violence, and the disasters, and the pandemics (Hello; H1N1, Ebola, SARS, etc.), because it equals ratings. They need eyeballs glued to televisions, or newspapers, or computer screens in order to make money.

The panel shows found on many cable news channels are much the same. They'll tell you what happened, or what might happen, then turn to a group of "pundits," to tell you what to think about it. And, it's usually only a matter of time until one of these people makes some outlandish statement or prediction meant to stir up the masses – the truth be damned. This is, of course, meant to ensure viewers will tune in to see what they'll say tomorrow.

Instead of – or perhaps, in addition to – the media changing how they do what they do, I'd prefer we foster more people who have been taught to think for themselves; who can take in information, process it, and come to their own rational conclusions.

Sadly, in this day and age of constantly shrinking education budgets, and growing – misguided – anti-intellectual attitudes, I don't see that happening any time soon. Once again, as Pogo warns: "We have met the enemy, and he is us."

Posted by Bud Koenemund at 15:15 No comments:

They took their time; fingertips drifting across torrid flesh, lingering on bare curves and angles, as if mapping an undiscovered country. Senses swimming in the mad current of erotic overload; fools struggling to comprehend everything at once: tongues exploring skin, savoring the sweet saltiness; chests rising and falling as ragged breathing quickened; fingers tearing at the sheets; scents intoxicating, and the growing crescendo of lustful pleas and moans enchanting their ears. Laboring to maintain control, trying to hold back, even as their bodies screamed for more. Both now submissive and dominant; surrendering to each other; she his and he hers.
Posted by Bud Koenemund at 20:00 No comments:

Lust in the Time of Coronavirus

Quarantine with me.
Let's get naked and ignore
"social distancing."
Posted by Bud Koenemund at 18:25 No comments:


Music thunders as we stumble through the back door – clearly marked “No Exit” – finding a dimly lit alley. Surrounded by millions, we two alone exist in this momentary solitude. Mouths mash together; tongues dance; limbs entangle; fingers tear at clothing, fumbling with enclosures.
“Do it,” you cry; consent, plea, and command all at once.
Eyes locked on mine, you spin to face the wall; tugging the fabric of your dress, bunching it at your waist. Pounding bass pulsates through our bodies. Flesh and souls merge; moans echo in the darkness. Trembling; plunging steadily deeper, as desire transforms two into one.

Posted by Bud Koenemund at 15:36 No comments:

Even in the midst
of celebration, my mind
turns to thoughts of you.

Posted by Bud Koenemund at 10:50 No comments:

Last night, someone on Facebook claimed "you Liberals only want to talk about the negative things. You refuse to acknowledge all the positive things that are going on in the country."

You're right. We should talk about all the good things that have happened. Things that will impact this country long after Trump is out of office.

Let's start with the $1.6 TRILLION (estimated) added to the national debt by the Republican Tax Scam...errr...Plan. And, let's remember that not only will that money have to be paid back some day, but the interest that accumulates on it will weigh us down that much more.

Let's say we're paying one percent interest on that debt - just one percent. In simple interest, that's an additional $16 BILLION a year, just on that piece of the debt.

Additionally, who is buying our debt? China and Saudi Arabia are two of the biggest. It's probably not a good idea for foreign powers to own our debt, and (potentially) wield great power over us because of it.

Pulling out of the Iran nuclear deal.

Higher gas prices. (So much for that tax cut.)

Trust in the US diminished around the world.

Oh, and not to mention, Trump is already putting pressure on European countries (you know, our allies) to stop doing business with Iran...including buying oil. Hmmm, maybe they can replace those supplies by buying from Russia. And, take a wild guess who has his fingers in the largest oil company in Russia...Trump's Sugar Vladdy. A nice little side benefit.

Because, seriously, who needs clean air, water, and soil tomorrow when there are a few more pennies to be made today?

And, while we're talking about tomorrow...

Looming cuts to Social Security and Medicare. Yes, Trump swore up and down he wouldn't cut those. Of course, he also swore Mexico would pay for his wall. But, once again, Paul Ryan is planning to cut "entitlements" - a wonderful Republican euphemism for "money taxpayers have paid in over their entire working lives." - in order to control the deficit. Uh, the deficit they skyrocketed with the tax plan.

Wanna bet Trump will go along with whatever Congress sends him? I mean, screw those lazy, old people! Sitting around, enjoying their golden years! Who needs them?!

The genius of the plan is that cuts to Medicare will mean more people die sooner, and thus be less of a burden on the Social Security system, right?

And, while we're talking about Nazis...

The Alt-Right, Neo-Nazi cockroaches crawling out into the daylight because "there are fine people on both sides."

Cutting funding for the Affordable Care Act and CHIP.

Because the guy who reportedly asks to start meetings with a prayer (another lie), wants to do exactly what Jesus would do...strip away health care coverage from those least able to afford it on their own.

Hey, if those kids want health insurance, let 'em drop out of daycare and get a stinkin' job like the rest of us!

$30 million (in the latest plan) to roll tanks down the streets, damaging them - the streets, not the tanks - in the process, so Cadet Bone Spurs can wear his medals from military school, and strut like a tin-pot dictator playing with his toys.

By the way, (again, according to the latest estimate) the $30 million could house every homeless veteran in the US for six months. But, yeah; Trump cares about our veterans.

The aforementioned US debt China holds? Eh, probably not important.

Instead of raising tariffs on US products (so far), China has already cut their purchases of soybeans. But, I'm sure that won't hurt US farmers; most of them in states that voted for Trump.

And all that inexpensive stuff you get at Walmart? Get ready for a surprise.

Man, higher prices on retail goods made in China, and higher gas prices? It's like the little guy just can't get ahead.

Posted by Bud Koenemund at 04:00 No comments:

There Once was a Man from Verona...

I wrote this limerick (my first - and probably last) for the St. Patrick's Day contest on a local radio station. It didn't win, but that's just as well; The Mad Limerickeer just doesn't have the same ring as The Mad Sonneteer.


There once was a man from Verona,
Whose wife was a bit of a stonah.
He caught her in bed
With a dealer named Ted,
And, now he lives all alonah.
Posted by Bud Koenemund at 10:10 No comments:

Inspired by “The Salvation of Mosul” by Joshua Hammer, Smithsonian magazine, October 2017

I used to visit the museum, before all this. The purge… The war… I hated this painting; the dull colors, the awkward gaze, the lazy brushstrokes. Sometimes, I’d stare at it for an hour, wondering what people see in it. Other times, I’d avoid the hall where it hung.
But, when they started closing libraries, and burning books, I knew it wouldn’t be long before they came for everything else. I had to save it… The art… Whatever I could… Even as flames destroyed the building. I rescued this.
Someday, I’ll give it back. Maybe it will help people remember.

Posted by Bud Koenemund at 16:00 No comments:


Even as the fighting ended, peace still seemed like an ethereal dream; something that would slip through your fingers like cigarette smoke. The silence was surreal. The sound of gunfire and explosions, aircraft and dying men faded, replaced by…nothing; not even wind blowing across a wrecked landscape.
Five minutes ago, they'd been at war – now they weren't. They’d run hunched over; sat huddled in bunkers; crouched in foxholes; ducked, crawled, and dove.
For the first time he could remember, he stood up; stretching to his full height. He'd been a soldier all his adult life.
“Now what?” he asked.

Posted by Bud Koenemund at 16:00 No comments: 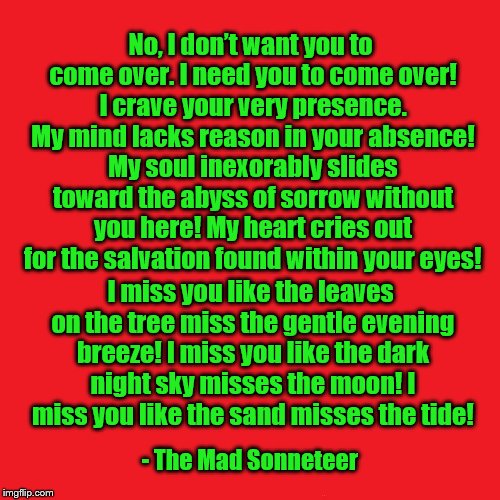 Posted by Bud Koenemund at 20:45 No comments:

Bud Koenemund
I am 51 years old, and currently live in Pittsburgh, Pennsylvania. I began writing my first story while serving in the United States Army. I write poetry, short stories, novels, songs, editorials/opinion pieces, news stories, screenplays, satire, erotica, and anything else that strikes me. At any given time, I have about a dozen writing projects in various stages of completion, and a few more banging around in my head. I get many of my best writing ideas while I'm in bed, driving, showering, or on the toilet; and I keep a pen and paper in all those locations (OK, in the shower I use children's bath crayons on the tiles). Most of the time, I write from inspiration - I've had times when I've written a Shakespearean sonnet during a 15 minute drive, or awakened from a sound sleep, wrote a poem in a few minutes, and then gone back to sleep. Now, on a distasteful, though sadly necessary, note: Unless otherwise noted, quotated, and/or attributed to another author, the works on this page are solely the intellectual property of Bud Koenemund, and as such are protected by copyright.